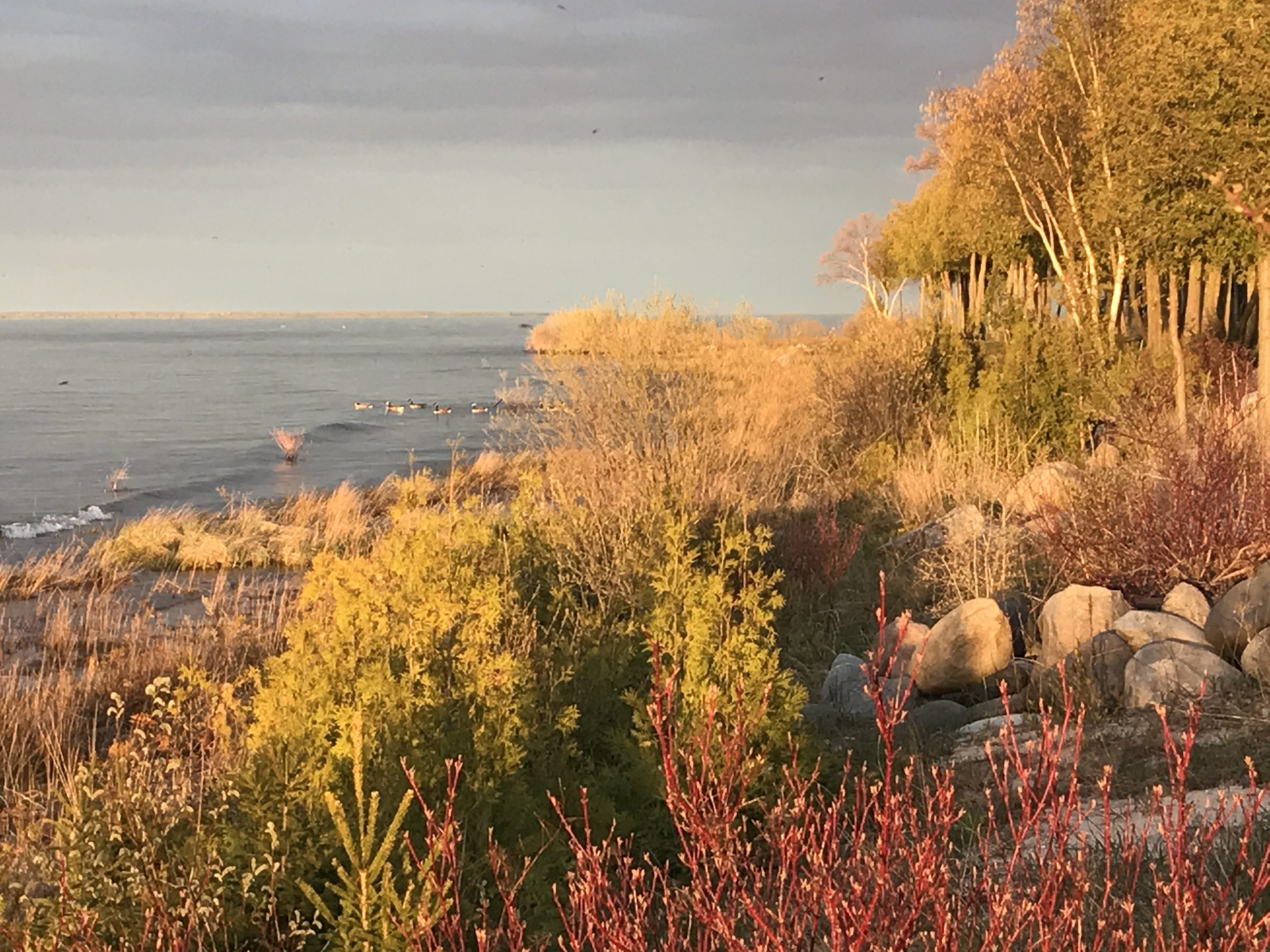 We were so excited to be able to spend 10 days with our daughter, Kayla.  She is a social butterfly and for us to have 10 days with her to ourselves was amazing.  Not only did she schedule this time for just us, but she also told her summer employer that she couldn’t start her new job until after our trip.  We were in bliss.

The first day, we decided to do a quick jaunt up the peninsula of Grand Traverse Bay and see the beaches, the vineyards, cherry orchards and also to see Old Mission State Park.  We hiked some really pretty trails, however, it was still spring time and the air was a bit chilly (in the 40’s).  We slowly meandered down the beach roads admiring the beautiful mansions along the way.

The trees were in full bloom in Traverse City and we strolled the sidewalks for a little window shopping to get acquainted with the town that Kayla was going to live in for the summer and possibly relocate to, once she graduates from her university.  It is a beautiful city.  Plenty to see and do and a lot of activities.  The wind was blowing constantly from the lake and I was wondering why no one was out kiteboarding (with the exception that it was in the 40’s and the water temp is in the low 30’s), but I thought, that’s what wetsuits are for.  Well, some of the stores actually had kiteboarding equipment, so I guess I was just too early in the season to see anyone enjoying the constant breeze in a sporty way.

Well, after strolling the shops for a while, we decided to call it a day and prep for our road trip for the next week and a half.  We drove our scout vehicle back to our lakeside campsite at Holiday Park Campground and enjoyed a mellow evening.

Since Kayla was our tour guide (with the help of her mom too), we decided to make Sleeping Bear Dunes National Lakeshore our first stop.  This place is beautiful.  The dunes come up from the waters of Lake Michigan and climb up over 700 feet in elevation.  Since the dunes are created with the finest of sands, the water color is amazing.  If it wasn’t so freakin’ cold, we would’ve thought we were back in the tropics with the azure water colors.  The water was also so clear, that I could see a huge “bait ball” school of fish.  We played, rolled and laughed along the sandy dunes and made our way to the giant “Dune Climb” where you can climb to the summit and see more amazing sites that Michigan has to offer.

On our way out of the park, we saw a few deer running through the meadows and jumping into the forest.  Nature is always beautiful in its rawest form.

We drove north past Maple City and parked for a bit next to the Carp River in Fishtown, Leland. We did the tourist thing going in and out of the shops and having a fun time.

We eventually made it back to the RV park and watched the ducks, geese and other animals mother over their newborn babies.

We got Pepe the Prius back on the tow dolly and headed off to Mackinaw City.  We decided to get a weekly rate at the Mackinaw Mill Creek Camping campground.  It was great.  We didn’t have any neighbors by us and we had a magnificent view of Mackinaw Bridge and Mackinac Island.

There were some black mosquito looking flies everywhere.  They didn’t bite but the swarms were so vast, at one time we thought a truck was on fire and black smoke was coming from it, the swarm was so thick.  They covered the side of our RV and were a nuisance but they really didn’t mess with us that much.

If you’ve ever read about Mackinaw or Mackinac, they are both pronounced the same, “Mac-in-naw”.  They are just spelled differently and people interchange them often.

We decided to splurge and pay the big bucks for the ferry ride to Mackinac Island.  It was worth it.  This is one of Melissa’s favorite places.  There are no cars allowed on the island (except for one ambulance we saw) and everyone rides bikes everywhere or use horse and carriage for transportation.  We decided to walk and it was beautiful.  We walked by the bay and out and around the southeast side of the island.

We made it to the stairs of the natural arch rock and hoofed it up to the top.  The view was magnificent and the arch rock was beautiful.  We continued our hike up to the “cave” which turned out to be somewhat of a joke and then we paid our respects at the cemetery.  We continued down the hill and past the large fort where a young man was dressed up in French military clothing.  He was practicing on his drum and trying to entice people into the fort.  Pa-rump-a-bump-bump!  Soon the major crowds would be here and he would be swamped with tourists.  We were so glad to be here in the off season.  We decided to head over to the hotel.  It’s a good thing we had our hiking shoes on, since we were putting some miles beneath our feet.

We got to the garden of the hotel and Kayla and I went up to see if the sign we read was actually true.  The sign stated, “Ten Dollars to enter the Grand Hotel, if you are not a guest”.  Now, I couldn’t believe it, since I have been all around the world and have never had to pay to see the grounds of a hotel, unless it was an actual museum.  Well, it was true.  They had a nice young lady standing at the path to the hotel (the bouncer) and she politely told us that we couldn’t enter unless we were guest or we had to pay.

Oh well, we decided to use our cold hard cash on something better than that… Mackinac Island Fudge!

We ate our dessert on the pier awaiting our ferry and just like the rule of travel, we were waiting at the wrong pier.

Our ferry was leaving in five minutes from the other pier on the other side of the bay.  Well, just like good travelers, we jogged through town weaving in and out of people and managed to jump aboard, just before they lifted the gangway to depart.  It’s a wonderful ferry ride.  The ferry we were on had this giant rooster tail of water flying out the back.  We had a great time and Kayla smiled from ear to ear.

Kayla had been to “the Soo” before and we all decided we should do it too.  Did I mention it is still spring and not warm anywhere in Michigan yet?  It was freezing.  We made the drive in record time and had a good time catching up as we drove.  Kayla had a friend from college that lives in Sault Ste. Marie, so she contacted her and told her we were coming up.  We always believe in getting the “local knowledge” whenever you can and Kayla’s friend was great.  Her dad was a retired deputy sheriff there and they knew everyone.  She took us to the Soo Lochs and we watched the ships go through, then we went down the main street and stared disbelievingly at the lack of people on the streets.  Summer had not hit yet, and no one was in town.  It was stark.  We eventually made it to a coffee shop and had some good hot java to keep us warm and going strong.

It was a quick visit and we headed west out of town for a drive around the upper peninsula.  We managed to stumble on the Tahquamenon River waterfalls and saw three of the great lakes (Lake Michigan, Lake Superior & Lake Huron) in one day.

One night we sojourned over to the Headlands International Dark Sky Park, which is a really cool forested area that ensures there is no light pollution.  Once you enter the “dark area” you cannot drive with your headlights on and you cannot use any flashlights to light your way down the tree lined paths.  There are numerous night photographers trying the capture the best photos with their exposure settings maxed out on their cameras.  We tried to capture some images but it wasn’t in the cards for us.  It was a really fun place though.

SUP on the Lake Huron

Kayla and I decided to pump up one of the stand up paddle (SUP) boards and go out for a paddle on Lake Huron.  It was pretty cool.  Oh, I mean cold.  Actually, it wasn’t that bad.  We put on our wetsuits and paddled around for a while and had a good time of it.

There were some interesting things to see from the perspective of a paddler and we didn’t have to get completely wet to look down 20 feet and see the fish swimming around the bottom.

Off to do more adventures, we did some other interesting things, like taking a drive to Cheboygan and walking along the beaches.  We really just loved the time we got to spend with our daughter.  We really wished William could have been there too, to make the family complete but there will always be other times.

Finishing our trip at Kayla’s moms new house, we had a great dinner with Kayla, her mom and grandmother.  We take great pride that we all get along and Kayla is the product of several great parents and numerous grandparents.

Check out our Next Blog Post USA – Michigan to Niagara Falls