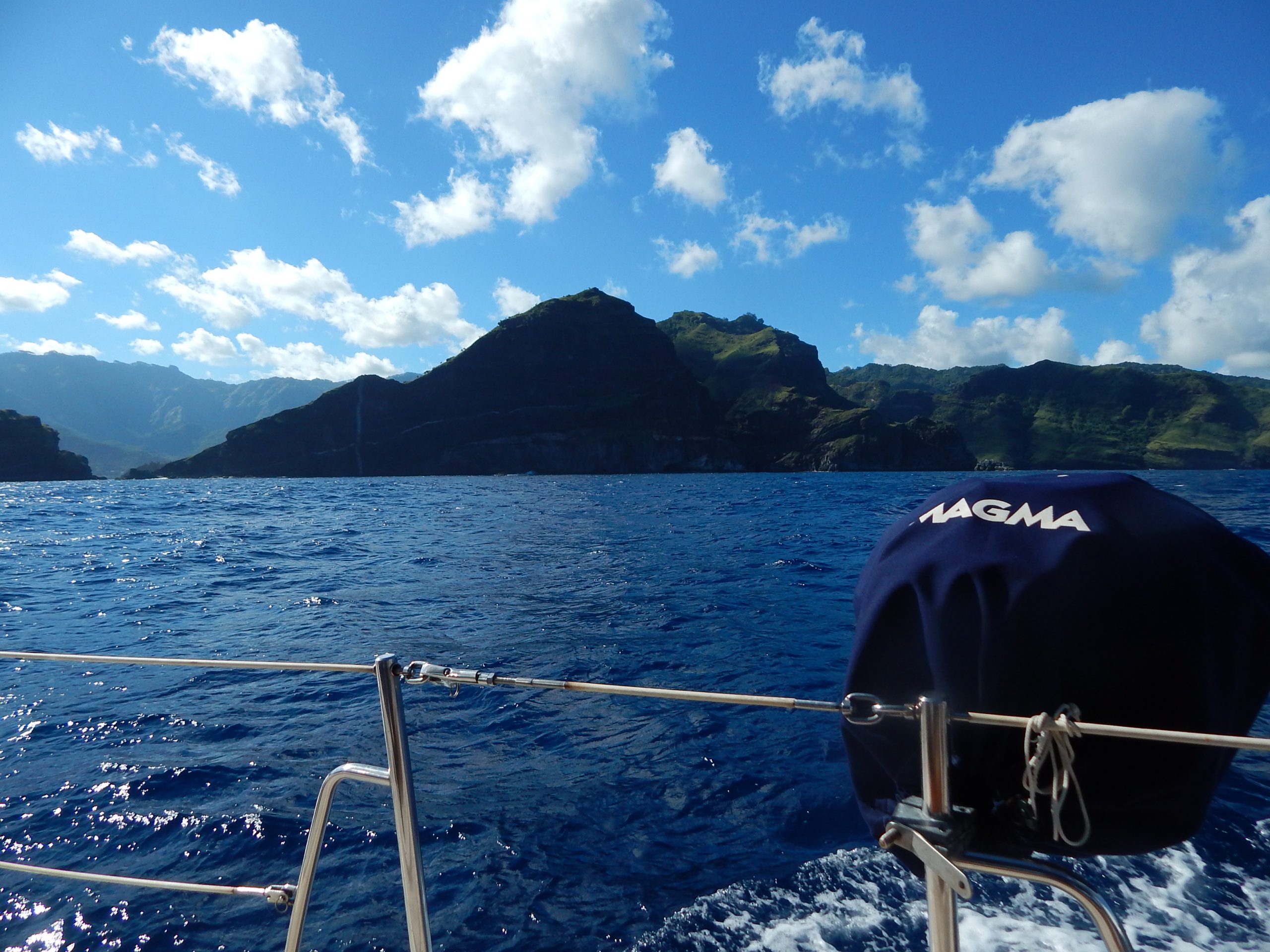 We arrived at the Yacht Club de Tahiti anchorage around 0900 and there was only about one or two open areas to anchor in.  We cruised by one of the boats at anchor and asked them for some local knowledge of where to anchor, where the dinghy dock was, etcetera.  We decided to anchor closer to the yacht club, just so we didn’t have to dinghy so far each time we needed to go into town.

We dropped anchor in about 65’ of water (many anchorages are 65’ to 100’ deep) and we let out as much scope as we could (probably only 3 to 1 or 4 to 1) but it seemed like our anchor was holding well in the muddy/sandy bottom.  We were exhausted, so we took a nap before getting the dink ready to go into town.

When we finally went into town, we basically just walked around to get the lay of the land.  The sidewalks were really dilapidated and the cars flying by reeked of diesel and gas fumes.  For being in paradise, we were not impressed yet.

We talked to a few cruisers and they told us that if we were going to go provision, we should walk down to the local Carrefour shopping center.  We were elated when we arrived since it was so large and had a great selection of food and other things.  We knew to expect the prices to be really high, however we began to find local foods that were cheaper but definitely less healthy (baguettes, pork and beans, etc.)

One of our neighboring boats was a young French couple with a baby aboard.  We could hear them singing to the baby when she cried and we could tell they were a fun family.  I took the dinghy over and introduced myself.  The parents’ names were Jonathan and Adg and they were really sweet.  He was repairing a pretty beat up older boat and he still had a lot of work ahead of him.  He told me the he was a super-scavenger and he walked the streets and visited the ship yards looking for things others threw away, so he could refit his boat.  I have to say that we had some pretty ingenious ways of using things.  He and his wife introduced me to their little baby that was teething and she was adorable.

When I got back to my boat, I told Melissa about our new friends and we decided that we should donate our baby life jacket and our toddler life jacket to them, when we saw them next.  We brought the life jackets along, just in the off chance that we were gone so long that our kids had grand-babies, we wanted to protect them.  However, we really saw an immediate need to help our new friends rather than wait for something that may be a long time away.

The second night at anchor a storm blew in, in the middle of the night.  We were so in tune with our boat, that we knew what every creek and moan meant.  Something was wrong… I felt it.  The wind had picked up to about 30 knots and gusting to 45.  I jumped up and ran to the helm.  Melissa was right behind me.  It was raining sideways and pretty dark but I saw that we were sliding backwards into a million dollar catamaran.  I ran down below and opened the raw water intake thru-hull and then jumped back up on deck and turned on the engine.  We were dragging anchor, however, in my mind it seemed like the catamaran was at fault, since they moved earlier in the day and we somehow thought they were dragging.  Regardless, we wanted to let them know we were about to hit them sideways.  Melissa yelled (in the prettiest and nicest voice), “Excuse me, excuse me!  I think we are going to hit your boat!”  I put our boat in reverse and we just barely tapped the catamaran.

By this time, the husband and wife owners of the cat were up on deck and trying to help us with flashlights.  Melissa yelled over to them, “I think you’re dragging anchor.” And they replied (in Australian accents), “I don’t think it’s us, we’re on a mooring.”  “Dammit”, I thought, “we are the ones dragging.”

Well, Melissa and I worked like a perfectly oiled machine.  I calmly guided her on what to do and she replied in kind.  No yelling.  No hysterics.  Just good communication.  We noticed a French guy that had come over in his dinghy to help.  Basically, the wind died down enough so we could motor up and around the catamaran and pull up our anchor at the same time (it’s great to have a windlass switch at the helm).  The guy in the dinghy piloted us over to an open dock side-tie and we were so thankful.  As we motored away from the catamaran, I yelled over to them that I would visit them in the morning, in case there was any damage.

We were beginning to really hate these deep anchorages.

The next morning we went over to the cat and Melissa handed over a gift of her Melissa Harlow Design jewelry to the wife.  They were a super nice couple and said that nothing had happened to their boat.  We were so elated.  Nothing happened to our boat either.  The wife smiled and said, “I can’t believe how calmly you two handled that, last night.  You both communicated so well together and I can tell you, if that were my husband, he’d be yelling at the top of his lungs.”  That, perhaps, was the nicest compliment we had had for quite a while.  It was great, a bad experience turned into a positive one.

They also mentioned that this anchorage was notorious for boats dragging anchor.

We went into the Yacht Club de Tahiti and told the harbormaster of our ordeal.  He was so nice that he offered us a free mooring for two nights.  Of course, Melissa came back and gave him a pair of earrings, so he could give them to his wife.

Over the next few days, we managed to give the lifejackets to the baby.  Jonathan and Adg were so thankful and as you can tell from the pictures, the baby loved it too!

On the way back from one of our Carrefour runs, a frantic local Polynesian lady ran up to us and asked us if we saw her dogs (that had escaped her yard).  She was frantic because it was a very busy street with lots of cars zipping back and forth.  We were sorry to say that we hadn’t seen the dogs, but if we did, we would let her know.  We felt so bad.  As we walked down the path to the harbor, we could see two big dogs swimming in the bay.  I told Melissa to stay with the dogs and I ran back to get the lady.  These dogs were a perfect match.  She and I came running back and the dogs were soaked from head to toe and you could actually see them smiling (they were yellow labs).  The local lady was so thankful and we were happy to help.  Always makes you feel good, when you can help someone else and “pay it forward”.

The next day we departed Yacht Club de Tahiti and motor sailed over to Marina de Papeete.

We were so happy because our adult children were flying in, in a few days.  The next few days are a blur.  We did meet up with a few other cruisers (Huzzah, Nogal and some others) since they were there for the Tahiti – Moorea Rendezvous.  Renting a car through, EcoCar and finally we went to the airport and picked up our kids.  We were so ecstatic!  We hadn’t seen our children in more than half a year (even longer for our daughter since she was in Central Michigan University before we left).

We dropped off their stuff at the boat and then we went on a tour of Tahiti, since we had the rental car.  We drove down to Teahupoo to see the giant waves.

We were thinking about hiring one of the locals to take us out to the reef and see the waves, since they were going off (about 15’) but the kids were exhausted and didn’t want to do the trip.  We could actually see the waves from the parking lot, but they would have been way more incredible up close and personal.

We stopped by Yacht Club de Tahiti to show the kids where we had been the week before and to show them a particular boat that had a clown on it, that we all thought was pretty funny.

We also enjoyed the Food Trucks in downtown Papeete.  Numerous food trucks show up at the municipal pier each night and you can choose what kind of meals to eat.  They serve so much variety but some dishes include: Hamburger and frites (fries) of course, pizza, fish dishes, gourmet French food, and a cornucopia of desserts.

Of course, if you visit Papeete, Tahiti, you have to make it to the Papeete Municipal Market, where local sell fish, fruit, clothing, souvenirs, oils, handbags and all the other things you can think of.

We had reservations at our RCI timeshare on Moorea, so we loaded up Harlow Hut with our new crew and departed Tahiti for Moorea.